Another species of bee added to the endangered list, almost wiped out by Monsanto 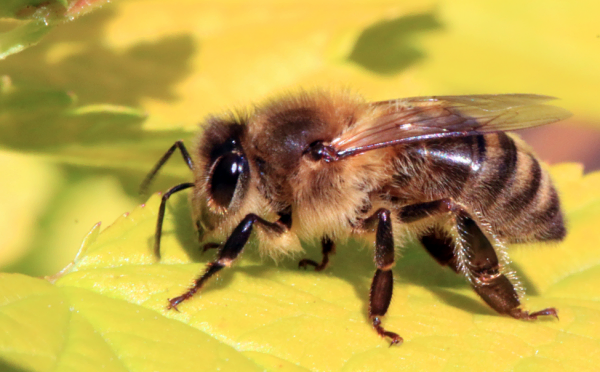 In case you thought that reporting on the rapidly diminishing number of bee colonies around the country was being over-hyped, this should tell you that prior warnings were spot-on, and indeed, prophetic.

For the first time ever, a rare bee species is being placed on the endangered species list, giving them special legal protections enshrined in U.S. code that, hopefully, will save them from extinction and billions of people from starvation.

As reported by Agence France Presse (AFP), U.S. officials with the Fish and Wildlife Service said in recent days that the decision was made following major declines in the rusty patched bumblebee population.

Monsanto, as we’ve reported in the past, has a hand in this. Fish and Wildlife Service officials say that the precipitous decline in the bee population is due to pesticides, disease and “climate change” (okay, so two of the three causes are real). The primary ingredient in Monsanto’s widely used Roundup herbicide, glyphosate, was tied to declining bee populations more than three years ago. (RELATED: How is glyphosate affecting the environment? Keep current on the issue at Glyphosate.news.)

The federal agency says that the once-common bumblebees are now “balancing precariously on the brink of extinction,” according to a statement released by the department and cited by AFP.

“Abundance of the rusty patched bumble bee has plummeted by 87 percent, leaving small, scattered populations in 13 states and one province,” said the statement. This is down from 28 states in the 1990s, the Fish and Wildlife Service noted.

AFP reported that the final rule listing the rusty patched bumble bee as endangered was published in the January 11 edition of the Federal Register. The designation becomes official on February 10.

“Experts say the bees are important because they pollinate economically important crops such as tomatoes, cranberries and peppers across the central and northern United States, as well as parts of Canada.”

The decline of the population, officials say, is likely tied to a number of factors, including loss of habitat, disease, parasites, use of pesticides and extremely small population size.

The designation as endangered means that the remaining bees “are in danger of becoming extinct throughout all or a portion of their range,” FWS said in their statement. The agency added that its number one priority is to “act quickly” to prevent total loss of the species, according to FWS Midwest Regional Director Tom Melius.

“Listing the bee as endangered will help us mobilize partners and focus resources on finding ways right now to stop the decline,” he added.

Late in 2016, seven species of bees found in Hawaii were the first to be placed on the U.S. list of endangered and threatened species. The yellow faced or yellow masked bees are now endangered thanks to a host of factors in that state, including loss of habitat, according to wildlife experts.

The pervasive use of pesticides is most likely one of the top causes, if not the top cause, as we have reported. A study published in September 2014 in the Journal of Experimental Biology demonstrated for the first time both chronic and acute effects in honeybees that had been exposed to Roundup.

A joint laboratory and field analysis that was conducted by researchers from the University of Buenos Aries in Argentina discovered that Roundup exhibited harm at sub-lethal levels – meaning that the exposure did not kill bees necessarily, but otherwise still affected them.

In August, we reported further that 57 different herbicides were linked to rapidly declining bee populations, and were responsible for poisoning European honeybees.

What are the implications of the extinction of entire species of bees? According to the Natural Resources Defense Council, every third bite of food you take was pollinated by bees or other pollinators. Research indicates that at least 30 percent of food crops are pollinated by bees, as are 90 percent of wild plants.

“Without bees to spread seeds, many plants—including food crops—would die off,” the organization said in a fact sheet on bees.