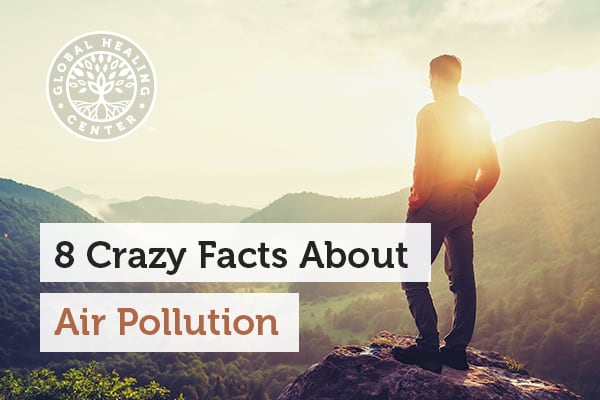 In the post about water pollution, I talked about 7 things you might not know about the disastrous state of our water supply. Water, along with food and air, is a basic necessity. Without clean sources our health and environment suffers. Unfortunately, pollution is everywhere—even in the air we breathe and poor air quality causes a number of health problems.

Air Pollution: 8 Things You Should Know

Air pollution has many sources — cigarette smoke, automobiles, and industrial chemicals are only a few things that pollute the air we breathe. Let’s look at 8 crazy facts about air pollution you probably haven’t heard about.

1. BPA is Polluting the Air

It’s not just “standard” pollutants that are an issue. BPA (Bisphenol-A) is also invading our air and it’s not going away. [1] In 2013, for example, industrial plants in Deer Park, Texas, emitted over 4,100 pounds of the endocrine disruptor. [2] As more and more chemical companies use BPA to make plastic stronger, the toxin is constantly released into the environment. Some think the lungs and skin also absorb BPA, which is a serious issue because the body does not metabolize the compound.

2. Air Pollution is a Deadly Health Crisis in the UK

The Environmental Audit Committee of UK’s Parliament recently argued that air pollution brings almost the same death toll as smoking. The committee even wants to phase out diesel cars because they’re the biggest part of the problem. Just how much pollution are we talking about? Around 46% of carbon monoxide, 42% nitrogen oxides, and 26% particulate matter all comes courtesy of these engines. [3] As pollution becomes an extreme health crisis in the UK, it makes you wonder if it’s reached that level in America. Have we just not acknowledged it?

3. The Air in Your Own Home is Likely the Worst

It’s not only the air outside; household air is often terrible. The World Health Organization even weighed in and released a report that highlighted the dangers of burning fuels like coal or kerosene. The WHO also called for changes for appliance emissions. [4] While this is a bigger issue in low- and middle-income countries, gas or kerosene space heaters–something many Americans use–can also be part of the problem.  While airtight spaces only contribute to the problem, recent evidence suggests they not only affect your physical health, but also your mental state. [5] Workers in windowless rooms had poorer sleep habits and lower overall qualities of life than their counterparts. [6]

Procter & Gamble recently released a report that polluted air can contain over 200 chemicals that age the skin. This becomes a big issue in larger cities with more pollutants; in fact, in a study of over 200 urban and rural women aged 30 to 45, pollution from city life added as much as 10 percent to perceived aging. [7]

As more and more children are diagnosed with attention disorders, air pollution could be a factor. One study suggests that it is the mother’s exposure to polycyclic aromatic hydrocarbons (PAHs)—emitted by burning fossil fuels—that is the main issue; however, new evidence takes that idea even further. [8] A new study looks at how unborn children exposed to high levels of pollutants in car exhaust are five times more likely to develop an attention disorder by age 9. [9] Air pollution can leave its mark; kids with ADHD, for example, have a higher risk for poor academic performance, risky behaviors, and there’s even the possibility of decreased earnings in adulthood. There is even some evidence linking indoor air pollution with autism.

6. The Air at the Gym is Horrible

It shouldn’t come as a big surprise that the gym has some pretty bad air quality. Could that smell, which you might’ve always associated with smelly gym socks, actually be an indicator of air quality? A research team in Portugal set out to answer that question by measuring the air quality of 11 gyms and found high levels of airborne dust, formaldehyde, and carbon dioxide. [10]

Nearly 6 million people visit the Sistine chapel every year and in 2010, it was discovered that increased levels of carbon dioxide from the breath of visitors was causing the frescoes to whiten. [11] A build up of powder made up of calcium carbonate and calcium bicarbonate was removed before any lasting damage could be done, but this byproduct sort of makes you think twice about increased levels of carbon dioxide.

It’s no surprise that burning trash is a massive source of air pollution; in fact, a study estimates that more than 40 percent of the world’s garbage is burned, releasing carbon dioxide, carbon monoxide, mercury, particulate matter, and other toxins into the air. [12] [13]Who would have guessed, though, that burning money also contributes to this pollution? A study in Taiwan found that ritual burning of paper money (at temples and festivals) added nearly double the number of toxins to the air. [14]

As you might’ve already guessed, pollution is a huge problem. At times, it might feel like too big for you to control, but trust me, nothing you do to help is too small. Always invest in an air filter for your home, and if possible for your place of business.

What about you? Do you feel like pollution should be considered a public health crisis? Share your thoughts about this entry in the comments.