6 Facts About Pesticides That Will Make You Angry

Source: 6 Facts About Pesticides That Will Make You Angry
by Dr. Edward Group 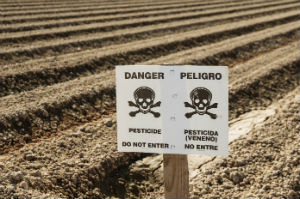 Many Americans recognize pesticides are a serious problem and are linked to all sorts of health problems. As if getting sick isn’t bad enough, let’s take a look at a few facts about pesticides that’ll simply make you angry.

Toxic pesticides like fumigants are used on all strawberries—even organic! These poisons are released into the soil to kill off diseases, weeds, and pests before they become a problem, but now you’re left with a toxic gas in the environment—and on the berries. These fumigants are also linked to cancer. [1] While the USDA is researching alternatives, no projects are looking at strawberries. [2]

One of the worst things about pesticides is that they turn something good into something bad. By that I mean they turn otherwise health-promoting fruits and vegetables and add a very unhealthy component — as well as an unavoidable component. Washing conventional produce will not wash away the pesticide residue. [3] And now, new research suggests that pesticide residue is extremely damaging to male fertility. In fact men who consume pesticide-residue-laden produce have sperm counts up to 50% less than men who don’t as well as abnormally shaped sperm. [4]

3. Pesticides Are Polluting the Water Supply

In the Midwest, where farming can be big business, fertilizer runoff is polluting the water supply. Iowa’s largest water utility is even “threatening to sue three rural counties” under the Federal Clean Water Act because of drinking water contamination. [5] The main concern here is nitrates in the water, which could poison—even kill—infants. Pesticides are such a widespread problem that they’re even making their way into our oceans. Whale meat from Norway was imported to Japan; tests confirmed that it had twice the legal limit of the toxins. [6]

In some places, toxic pesticides have even made drinking to escape your problems impractical. Take some wines in France, for instance. A report found that of some “300 French wines from the 2007 and 2008 vintages of the Rhône and the wider Aquitaine region,” 90% were contaminated with pesticides. [7]

Superbugs and antibiotic resistance is a scary problem and a a recent study found that glyphosate—the main ingredient in the weed killer Roundup—and two other common herbicides (2,4-D and dicamba) could be connected. [8] Exposure caused bacteria to react differently to common antibiotics. And with glyphosate also recently ruled as carcinogenic to humans by the World Health Organization (WHO), this latest study is just one more reason to stay away from herbicides. [9]

6. Pesticides are Linked to Autism

This one is insane… one study suggested that because of the glyphosate toxicity in our food supply, 1 in 2 children will have autism by the year 2025. [10] Take a second and think about the gravity of that situation — 50% of our children will be autistic due to completely unnecessary toxin exposure.

We can’t even rely on the government to protect us. The EPA takes the position that pesticides are safe — despite the evidence. And, in many cases, the laws about pesticides aren’t even being enforced. In Europe, however, they’re trying to further regulate toxic pesticides, and some US business and government leaders are having a fit. If Europe were to strictly regulate the toxins, the U.S. could stand to lose out on a multi-billion dollar import business. Unfortunately, when our health is on the line, our leaders only see dollar signs.

Have you made an effort to reduce your exposure to pesticides? Leave a comment below and share your best tip.