Source: Cellphone App Claims to Measure How Much Radiation Is Coming From Your Cell Phone
by Dr. Edward Group 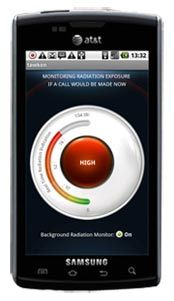 If growing news coverage of the potential dangers of cellphone radiation has you concerned, you’re not alone. Before it was put on “indefinite hold”, the City of San Francisco tried to enact a controversial new law which would require cell phone manufacturers to post the amount of radiation emitted by their respective devices.

In response to the newfound awareness which has prompted this law and others like it, an Israeli company called Tawkon has developed a mobile app (ironically enough) designed to measure the radiation levels of smart phones.

While phone manufacturers remain skeptical of its overall validity, their cellphone radiation app has been a huge success for the company, recently raising $1.5 million. Apple, specifically, has banned Tawkon from its online app store, citing that they felt it would be confusing to customers [1].

Not surprisingly, the application’s developer has responded publicly that they believe Apple is more concerned that the new app could harm sales of their overwhelmingly popular iPhone, and not with any potential “confusion” it might cause users.

Regardless of Apple’s true motives for wanting to keep Tawkon out of their app store, there may indeed be certain shortcomings to the approach it takes in gauging the radioactive threat of these increasingly necessary devices.

How the Cellphone Radiation App Works

Tawkon uses a complex proprietary algorithm to estimate how much radiation a cell phone is bombarding its user with at any given moment. It weighs factors such as current antenna strength (which typically fluctuates depending on the users location), and whether a headset is connected or speakerphone is enabled, in order to deduce how much radiation is being absorbed by the owner.

The major flaw to this approach is its dependence on accurate radiation baseline figures from device manufacturers. Because the app itself has no way of actually measuring the amount of radiation being generated, it must rely on the publicly posted radiation emission quotes to estimate a device’s moment-to-moment output.

Other Dangers of Excessive Cell Phone Use

Even if this particular smartphone app does oversimplify things a bit, the potential health benefits of monitoring mobile device use are immense. And not necessarily because of radiation exposure either.

A number of serious side effects have been associated with frequent, prolonged use of cell phones. Most notably, general cognitive delays and slower mental response times have been observed in people who spend excessive amounts of time talking on their phones. Other commonly observed side effects may include recurring headaches, nausea, stress and mood instability.

For many individuals, sensitivity to the electromagnetic radiation generated by cellular phones (and all other electronic devices) may be a significantly greater concern than the microwave radiation that is typically studied for causing brain tumors and other forms of cancer.

For many of us, simply doing without our cell phones isn’t an option. But that doesn’t mean you can’t take steps to reduce the risk of negative side effects.

Get into the habit of using either a headset or speakerphone whenever possible. Avoid using your phone in crowded areas or while driving unless you absolutely have to. And, if you feel that you may be showing signs of electromagnetic sensitivity, consider purchasing a device that dampens EMF from your cell phone. Also never talk on your phone when plugged in to a electrical socket as this greatly intensifies the radiation emitted.

You can also follow these cell phone safety recommendations from Dr. Ronald Herberman, the director of the University of Pittsburgh Cancer Institute.

Has anybody here used the cellphone radiation app from Tawkon? We would love to hear your thoughts on it.

Protect you and your family from harmful radiation ➤➤ Synergy Science