Biological Terrain Vs. The Germ Theory 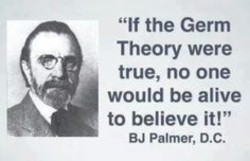 The germ – or microbian – theory of disease was popularized by Louis Pasteur (1822-1895), the inventor of pasteurization. This theory says that there are fixed, external germs (or microbes) which invade the body and cause a variety of separate, definable diseases. In order to get well, you need to identify and then kill whatever germ made you sick. The tools generally employed are drugs, surgery, radiation and chemotherapy. Prevention includes the use of vaccines as well as drugs, which – theoretically at least – work by keeping germs at bay.
At about the time that Pasteur was promoting his “monomorphic” germ theory, a contemporary by the name of Claude Bernard (1813-1878) was developing the theory that the body’s ability to heal was dependent on its general condition or internal environment. Thus disease occurred only when the terrain or internal environment of the body became favorable to germs.
An extremely brilliant contemporary of Claude Bernard’s was Antoine Bechamp (1816-1908). Bechamp built upon and extended Bernard’s idea, developing his own theory of health and disease which revolved around the concept of “pleomorphism.” In contrast to Pasteur’s “monomorphic” or single-formed, fixed state microbes (or germs), Bechamp had discovered tiny organisms (or microorganisms) he called “microzyma” which were “pleomorphic” or “many-formed.” (Pleo = many and morph = form. Interestingly, these microzyma were found to be present in all things whether living or dead, and they persist even when the host has died. Many were impervious to heat as well.)

Bechamp’s microzyma, including specific bacteria, could take on a number of forms during the host’s life cycle and these forms depended (as Bernard contended) primarily on the chemistry of their environment, or the biological terrain, or to put it a third way, the condition of the host. In other words there is no single cause of disease. Instead disease results when microzyma change form, function and toxity according to the terrain of the host. Bad bacteria, viruses and fungi are merely the forms assumed by the microzymas when there is a condition or terrain that favors disease and these “bad” microzyma themselves give off toxic byproducts, further contributing to a weakened terrain.
This is how Bechamp himself put it in his last book The Third Element of The Blood: “. . .the microzyma, whatever its origin, is a ferment; it is organized, it is living, capable of multiplying, of becoming diseased and of communicating disease. . . All mycrozyma are ferments of the same order – that is to say, they are organisms, able to produce alcohol, acetic acid, lactic acid and butyric acid. . . In a state of health the microzymas of the organism act harmoniously, and our life is, in every meaning of the word, a regular fermentation. In a state of disease, the microzymas do not act harmoniously, and the fermentation is disturbed; the mycrozymas have either changed their function or are placed in an abnormal situation by some modification of the medium. . .”

Thus, according to Bernard, Bechamp and their successors, disease occurs to a large extent as a function of biology and as a result of the changes that take place when metabolic processes are thrown off. Germs become symptoms that stimulate the occurance of more symptoms – which ultimately culminate in disease. A weakened terrain also naturally becomes vulnerable to external harmful microzyma – or if you prefer pleomorphic germs. So, our bodies are in effect mini-ecosystems, or biological terrains in which nutritional status, level of toxicity and PH or acid/alkaline balance play key roles.
For this and other reasons Bechamp argued strenuously against vaccines, asserting that “The most serious disorders may be provoked by the injection of living organisms into the blood.” Untold numbers of researchers have agreed with him. Nonetheless Pasteur and his like-minded contemporary Robert Koch – both being shameless self-promoters – easily won the propaganda war favoring the widespread use of vaccines – which then made boatloads of money for everyone associated. In fact, according to researcher E. Douglas Hume, if it had not been for mass acceptance of vaccines, the germ theory might very well have died a quiet death
Decades after Pasteur’s death researchers tried to expose the fact that Pasteur liberally “borrowed”, plagarized and twisted the work of others (especially that of Bechamp) but with little effect on the practice of medicine or the way we think about disease. Instead, as Dr. Bernard Jensen and Mark Anderson assert in their book Empty Harvest, “The germ theory is still believed to be the central cause of disease because around it exists a collossal supportive infrastructure of commercial interests that built multi-billion-dollar industries based upon this theory. To the scientific satisfaction of many in the health field, it has long been disproven as the primary cause of disease. Germs are, rather, an effect of disease.”
Interestingly and to this day, the whole theory of microzymas and how they operate has never been disproven – or proven false – by opposing research. To the contray, decades of research – beginning with Pasteur himself – has only served to bolster the mycrozyma theory. Not only does the germ theory remain unsubstantiated today, but Pasteur himself recanted it on his deathbed, writing the famous words: “It is not the germ that causes disease but the terrain in which the germ is found.”
For more information see the 1935 books Bechamp or Pasteur and Pasteur Exposed, both by E. Douglas Hume. In Bechamp or Pasteur? there is a description of Robert Koch, who was a contemporary of Pasteur’s and who developed his own germ theory “postulates” – themselves never proven, which are nonetheless still taught in medical schools today. Bechamp also defends himself against the shennanigans of Pasteur and allies in the last book he wrote called The Blood and Its Third Element.
https://www.bitchute.com/video/kkPqbPTmczRB/
DOCTOR WHO PREDICTED COVID-19 ANSWERS ALL
Triple board-certified M.D., Dr. Zach, joins Del in an evolutionary discussion on why Coronavirus is here, what it’s trying to tell us, and how we emerge from the darkness.
Video Length: 1:22:11 minutes

One thought on “Biological Terrain Vs. The Germ Theory”