Why Thyroid Health Is Completely Dependent on Selenium

Source: Why Thyroid Health Is Completely Dependent on Selenium
by Dr. Edward Group 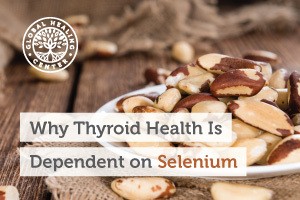 The thyroid is essential to some of the body’s most critical processes, including the development of the nervous and skeletal systems.[1] For the thyroid to function normally, it must receive the right nutrition, and that means getting enough selenium. Selenium is an essential mineral[2]and being deficient can lead to serious health problems such as Keshan disease[3], myxoedematous cretinism[4], Graves’ disease[5], and even thyroid destruction.[6]

Although the body requires selenium, it does not produce selenium and you must get it through your diet. For most people, this isn’t a problem since many common foods are a good source of selenium. Additionally, selenium is available as a nutritional supplement.

Regardless of the source, selenium is a critical nutrient for the body and nowhere is this more evident than the thyroid. In fact, the thyroid has more selenium content per gram than any other organ. It’s also home to certain proteins called selenoproteins[7] which contain selenium-based amino acids. Before I discuss why this is so important to thyroid health, let’s first understand exactly what the thyroid does.

What Is a Thyroid?

Your thyroid is part of your endocrine system and one of the most crucial glands in your body. Located at the base of your throat, the thyroid produces the hormones that play a major role in your body’s growth, maturation, and metabolic processes.[8, 9, 10]

How to Support Thyroid Health

There are a few simple steps you can take to support your thyroid. It is imperative that you minimize your stress levels. Stress is actually a hormone response that may negatively impact thyroid function.[17] Exercise is a natural and extremely effective way to combat stress.[18] Exercise can also help stimulate the secretion of thyroid hormones.[19]

Getting enough sleep also helps support a healthy thyroid.[20] Thyroid hormones can directly impact sleep quality.[21] Avoiding toxins like BPA, fluoride, and pesticides is also a smart strategy as they can have a detrimental effect on the thyroid.[22, 23, 24]

Following a balanced diet is one of the easiest ways to support your thyroid. Eat selenium-rich foods, as well as iodine-rich foods, as both are necessary for the synthesis of thyroid hormones.[25] While you’re at it, don’t forget about vitamin A, which also helps support normal thyroid health.[26] When considering your diet, incorporate gluten-free grains since gluten has been associated with autoimmune thyroid diseases.[27]

What Selenium Does for the Thyroid

The importance of selenium for your thyroid cannot be overstated. Most people know that iodine is critical to thyroid health. Selenium is less famous but equally important. Along with iodine and vitamin A, selenium helps remove thyroid-harming substances and supports normal thyroid structure.[7]

Thyroid hormone metabolism is impaired without selenium because iodine-based enzymes, called iodothyronine deiodinases, cannot be synthesized.[28] Iodothyronine deiodinases exist in several forms and are not yet fully understood, but do seem to play a role in preventing hypothyroidism.[29] These enzymes are essential for the activation of thyroid hormones. So, while iodine tends to get most of the credit for thyroid health, it cannot actually carry out its function without help from selenium.

Your body does not produce its own selenium. All selenium must be obtained through food or supplements. Once ingested, the element is broken down into enzymes called selenoproteins.[30] These enzymes exist in many forms, but two of the best understood are glutathione peroxidase (GPx) and thioredoxin reductase (TRx). The GPx and TRx enzymes promote antioxidant abilities on a cellular level.[31] TRx also aids in cell growth and helps process dehydroascorbic acid into vitamin C.[32] None of these vital enzymes could exist without selenium.

Selenium has also been shown to combat several thyroid-debilitating conditions

How the Thyroid Relies on Selenium to Ward Off Disease

Common thyroid maladies can be caused by low selenium intake, including Hashimoto’s thyroiditis.[33] With this condition, the thyroid first becomes inflamed and secretes excessive amounts of hormones. Then, over time, it starts producing far less than it needs.

Conditions like thyroiditis can lead to an imbalance of hormones and that can be the start of major disruptions in the body’s normal processes. Hypothyroidism, which is one such potential consequence, is a condition in which the thyroid fails to provide a sufficient level of thyroid hormones.[34] The outcome can be serious and include abnormal heartbeat[35], low body temperature[36], and nervous system disorders.[37] It can even disrupt the body’s ability to metabolize proteins, carbohydrates, and fats.[38] What can contribute to hypothyroidism? You guessed it, selenium deficiency.[39]

Role of Selenium in Nutrition

If thyroid health is important to you, you cannot overlook the importance of selenium. The body is made up of many parts that work together. Each part must be fueled with essential nutrients like selenium. In addition to supporting thyroid health, selenium also plays a role in combating free radicals. To learn more about how selenium supports your body, check out how selenium plays a role in human nutrition.

What do you do to ensure you get enough selenium? Let us know in the comments.

5 thoughts on “Why Thyroid Health Is Completely Dependent on Selenium”