The Selenium Element and Its Role in Human Nutrition 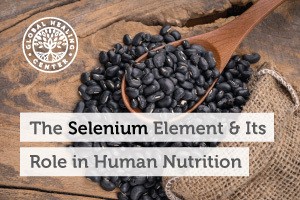 Selenium (Se) is a trace mineral with a very important role in human nutrition. Many of the human body’s normal physiological functions require a small, but vital, amount of selenium.[1] Selenium rich foods are fairly common, so obtaining a sufficient amount from diet alone is not a challenge for most people. However, supplements are popular for those who do find it difficult to meet their daily requirement through food alone. Let’s take a look at the chemistry that makes selenium an essential mineral.

Selenium was first discovered by Jöns Jakob Berzelius of Sweden in 1817. It’s named for the Greek word, “selene”, which means “moon.” Selenium is a non-metallic, Group 16 element and part of the Oxygen Family.[2] This family includes sulfur and tellurium, similar elements which are sometimes confused with selenium. Selenium is often studied closely alongside sulfur as the two elements frequently interact.[3][4]

Selenium is a semiconductor[5], which means it can partially transfer electrical energy. Semiconductors are an important part of all modern electronics. The use of selenium as a semiconductor has declined in recent years and has largely been replaced by silicon, but it’s still used in some types of surge protectors and photocells. Selenium is able to convert light into electrical energy[6] and possesses photoconductive capabilities.[7] This means that selenium gets more electrically conductive as light increases.

Reactions of the Selenium Element

Selenium is a reactive element and easily combines with other elements. It has over 25 different isotopes; 6 are naturally occurring, only 5 are stable. A single selenium atom contains 34 protons and 46 neutrons distributed across 4 energy levels[8] and its electron configuration is [Ar]4s23d104p4.[9]

Selenium is hardly ever found in its elemental state or as a pure ore.[10] Rather, it mostly exists in metal sulfide ores, like copper.[11] It reacts with fluorine, chlorine, bromine, and iodide by forming halides.[12] It can form two oxides when introduced to oxygen atoms: selenium dioxide (SeO2) and selenium trioxide (SeO3).[13] Elemental selenium is able to be oxidized to oxidation states of +6, +4, 0 and -2.[14] In its +4 state, selenium can exist as selenium dioxide (O2Se)[15], selenious acid (H2O3Se)[16], or selenite crystals (SeO3-2).[17]

Although some compounds, such as hydrogen selenide (H2Se), are extremely toxic[18], selenium and several selenium-based substances can be used to promote good health and wellness.

Selenium and the Human Body

Selenium is an essential mineral and the human body requires it to function normally. It’s a necessary cofactor for several enzymes, including nicotinic acid hydroxylase[19], glutathione peroxidase[20], and even amino acids like selenocysteine and selenomethionine.[21]

Selenium has antifungal properties.[22] This is one reason why selenium sulfide (SeS2), is an active ingredient in certain shampoos, conditioners, lotions, and creams.[23]

Though it can be used for many purposes, selenium is most valuable to humans as a dietary mineral. It can be used topically, but is best as an essential nutrient. A rare crystallized form of native selenium exists but is not a reliable source as a dietary supplement.

Selenium is typically found in plants and soils. Selenium-rich plants offer great vegetarian options for meeting dietary requirements. Many types of meat can also serve as a good source of dietary selenium. Regardless, people often fail to receive a sufficient amount of selenium in their diet. In these instances, a selenium supplement can help prevent selenium deficiency.