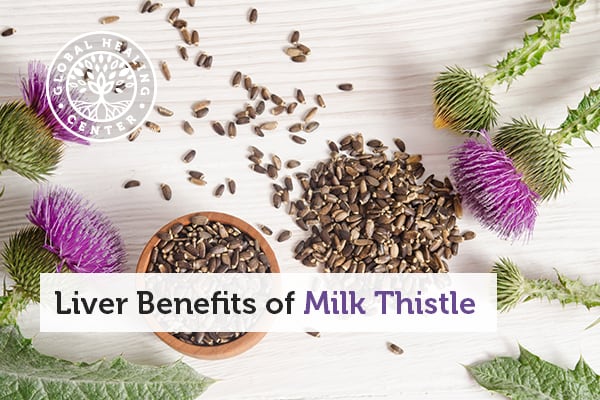 Milk thistle, or Silybum marianum, has been used by healers around the world for more than 2,000 years to support prostate, liver, and gallbladder health. Its held in high regard especially for remedying toxin-related damage and other conditions that produce redness and swelling. [1] The incredible success of improving liver function has (finally) captured the attention of modern researchers.

The Active Compounds in Milk Thistle

The active component in milk thistle is a compound known as silymarin. It is comprised of six other compounds known as flavonolignans — two of which, silybin A and B (silybin is also referred to as silibinin), are considered the most beneficial to humans. These two flavonolignans have been observed in the highest concentrations of blood plasma of individuals who have ingested silymarin. [2]

How Does the Body Use Silybin?

Research has shown that the powerful flavonolignan silbyin has been found as part of other compound that result from the action of phase II liver enzymes. [3]These phase II enzymes lead the charge in detoxifying the body.

One such hepatic enzyme is glutathione. Created naturally by the liver, this enzyme is known as the super anti-oxidant. It bonds with toxins in the body making them too big to cross cell membranes. Why is this beneficial? Because it effectively makes the toxins inactive and easier to transport out of the system.

That’s really the main way that silybin supports liver function — it facilitates the removal of toxins from the body. As a result, silybin provides antifibrotic, antioxidant and positive metabolic effects. In addition, large amounts of silybin have not been found to create any side effects. Ongoing clinical trials continue to prove what healers through the ages have known -– milk thistle provides a powerful agent for the liver. [4]

Milk thistle has been found to provide a positive effect against toxin-related injuries to the liver. The greatest effect has been seen in addressing damage from drug use, viral hepatitis, mushroom poisoning, and alcoholic and non-alcoholic liver disease. [5] It has also proven effective in supporting liver function in individuals exposed to high amounts of hydrogen sulfide (sewer gas). [6]

Another study applied milk thistle for liver support in an individual undergoing exhausting medical treatments. When used in this manner, the individual experienced improved liver function. Although more research may be appropriate, this is an encouraging first step in demonstrating milk thistle’s ability to support liver function, even during draining medical treatments. [7]

Based on the incredible successes of milk thistle in helping liver function, researchers have begun to look at other ways to apply this potent tool. In one study, silymarin was used to support thalassemia, a genetic disorder that can lead to iron toxicity. The results found that patients using the silymarin experienced better liver function and reduced iron overload as opposed to those using placebo. [8] By isolating the active flavonolignans in milk thistle, the door is wide open to the possibility of its use for other illnesses. [9]

With over 2,000 years of traditional use recently understood by modern science, many people take a daily milk thistle supplement to provide additional nutritional support to their liver. With the toxins, environmental and otherwise, our bodies are assaulted by on a daily basis, the liver is just one organ in our body that could benefit from ideal nutritional support.

I recommend Livatrex®, our herbal liver support liquid supplement. It is a blend of raw herbal extracts including milk thistle seed, yellow dock root, chicory, and borotutu bark. It uses triple distilled water and vegetable glycerine as a base instead of alcohol, which can harm the liver.

Is milk thistle part of your supplemental regimen? What benefits have you noticed? Please leave a comment below and share your experience with us.