What is Kombucha? The 10 Facts You Need to Know

Source: What is Kombucha? The 10 Facts You Need to Know
by Dr. Edward Group 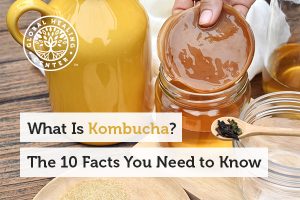 If you’re into health food, you may have heard of kombucha. Kombucha is a lightly fermented tea which has achieved considerable popularity among the healthy eating crowd. Advocates claim it enhances cognition, stimulates immune function, supports weight loss, can be applied as a therapy for almost any ailment, and even promotes longevity. [1] [2] But, before you dive into your first cup, it’s a good idea to know why it’s good and what to look out for — so here are the 10 must-know facts about kombucha!

Kombucha consists of tea, sugar, clean water and a SCOBY. “SCOBY” stands for symbiotic culture of bacteria and yeasts. The sugar feeds the yeast and bacteria which form the SCOBY layer — the very identifiable, thick, mushroomy layer that rests on the top of the kombucha. This SCOBY adds the flavor, acidity and promotes the fermentation which creates the health benefits of kombucha. It also contains a small amount of alcohol (only .5%-3% depending on fermentation), gluconic, acetic, lactic acids and some substances that discourage bacteria. Many people describe the taste of kombucha as sweet and acidic, almost like soda with a slight vinegar taste.

As for its origins, kombucha is traditionally associated with Asia, Russia and Germany but became a popular drink globally by the late 1990’s. Exploratory animal research offers substantial evidence to support the health claims that kombucha drinkers have known for decades. [3]

2. How is Kombucha Made?

Remember as you read this, kombucha is a fermented drink. To make kombucha, tea is steeped in purified water and sugar is added. To this mixture, a culture of fungus and bacteria is added. Typical fermentation time runs about 14 days. [4] The culture used is a very specific SCOBY, and anyone looking to brew their own (often recommended), should find a detailed recipe to ensure best results and maximum safety. Safety? Yes, you want to be sure you’re only using friendly organisms that are free of contaminants.

Fresh food is the best food and that’s especially true for kombucha. Making it at home ensures the freshest ingredients with the greatest amount of active nutrients. Studies have shown that commercially produced kombucha loses much of its antioxidants when stored in warehouses and on store shelves. An active fermentation process in storage can also cause films to form, this substantially degrades the quality. Although various processes have been tried in order to improve storage quality, none have proven successful. [5]

4. A Caution About Making your Own

Keep the fungus and bacteria culture “clean” when making your own. While the SCOBY contributes to the health value, any common mold will contaminate the product. Contaminating mold would appear black, green or blue. If this appears on the culture, dispose of it, clean and sterilize all containers and tools used to make the kombucha and start over.

The bacteria-fungus culture creates a tea loaded with beneficial probiotic organisms. The benefits of probiotics are well documented and linked to digestive health and immune function, just to note a few. One study found that kombucha may provide substantial activity for controlling e. Coli and Staph bacteria, a common benefit of many probiotics. [6]

Different brewing factors such as tea selection, brewing time, sugar, and fermentation time alter the specific nutrients and probiotics present in any given batch. If you make your own, you can work with these different elements to create the batch which makes you feel the best!

6. How Kombucha Protects the Liver

Research suggests that kombucha tea consumption does appear to have protective effects for the liver. [7] One animal study reported that kombucha decreased levels of toxins known to cause liver damage. [8] A similar study reported of anti-stress benefits from the tea. [9]These benefits are unique to Kombucha and do not result from unfermented teas.

7. Kombucha May Even Promote Lung Health

Chinese researchers discovered a unique, potential application for kombucha tea. Used as an inhalant, kombucha was found to remove silica from lungs in an animal model. [10] This may be extremely promising for the men and women with construction, masonry and mining jobs who are exposed to dangerous silica dust. The American Lung Association estimates over 2 million men and women are exposed to such lung contaminants and have the potential for developing complications. [11] Although still exploratory, it’s exciting to hear that kombucha may be a potential life saver and support normal lung function.

Metabolic problems and liver and kidney dysfunction are frequent side effects of diabetes. Good news, the antioxidants created by kombucha fermentation may help support liver, kidney and pancreatic function. [12] Shown to suppress glucose levels and increase HDL cholesterol levels in animal trials, researchers have indicated kombucha may be a good health support option for those with diabetes. [13]

Research in 2010 indicated the antioxidant effect of kombucha may heal stomach problems from excess acid build-up, such as ulcers. It’s reported that kombucha appears to protect the layer of the stomach which prevents acid erosion of stomach tissue. This results from reduced levels of stomach acid, and has been suggested as a support option for those with stomach ulcers. [14]

10. Kombucha and the Kidneys

When researchers tested kombucha on kidneys damaged by environmental toxins, they found that the antioxidant potency of kombucha tea may repair damaged kidney tissue. [15]These findings suggest kombucha tea has potential for many uses beyond the health-focused benefits advocated by traditional consumption and research supported by current research.

Do you make or drink kombucha? What tips do you have? What benefits have you noticed? Please leave a comment below and share your experience with kombucha with us!

12 thoughts on “What is Kombucha? The 10 Facts You Need to Know”