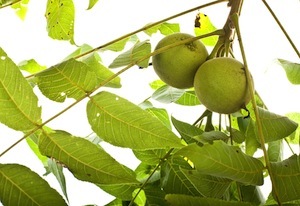 Black walnut, or juglans nigra, is a tree that thrives in low, very moist and warm environments along the eastern seaboard from Florida to Texas and north up through the Dakotas to Ontario. Its wood is dark reddish-brown and has a fine grain and luster that made it a popular hardwood in the early 17th century for furniture, flooring, gunstocks, and coffins. Many traditional medicine systems have utilized black walnut as a natural therapy, including the Romans who called it the “imperial nut.” Black walnut hull, specifically, contains juglone, tannins, and natural iodine and is an excellent support agent for harmful organism cleansing.

Juglone is found in nearly all parts of the tree and is a powerful defensive characteristic of black walnut. How? Well, juglone is toxic to many plant species which is why you will not find many plants growing within several yards of a black walnut tree. This defensive action has been redirected into healing powers and juglone is believed to be effective against harmful organisms. Many natural health practitioners recommend juglone as an important part of harmful organism cleansing. [1] [2]

Plants produce natural compounds to help defend against insects and other harmful organisms. These compounds are called tannins. Tannins are believed to support harmful organism cleansing and even help with blood disorders and stress.

Iodine is one of the most appreciated substances in both traditional and conventional medicine. Required to produce thyroid hormones, iodine also supports harmful organism cleansing by affixing itself to harmful organisms and annihilating them. Black walnut hull is an excellent source of iodine.

Combining juglone, tannins, and iodine, produces a potent elixir that is toxic to harmful organisms. For this reason, organic black walnut hull is one of the many important components of Paratrex®, the amazing health supplement designed to support your immune system and promote optimal internal health. Paratrex® works with your natural defenses to help create an environment hostile to invading organisms!