The 6 Most Dangerous Excitotoxins

Source: The 6 Most Dangerous Excitotoxins
by Dr. Edward Group 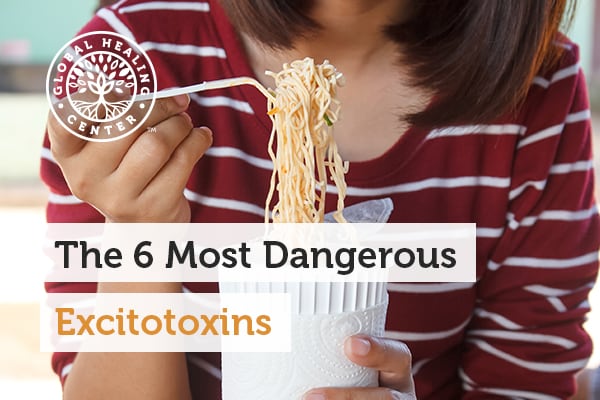 If you’ve ever felt compelled to take another bite, despite feeling full, the problem may not be a lack of self control. In fact, the issue may not even be with you at all as it’s very likely that an excitotoxin is the culprit. These non-essential amino acids stimulate or “excite” the umami or savory taste buds making food seem more flavorful than it really is. These compounds are abundant in most processed foods and restaurant meals, and many people are unknowingly consuming these compounds in large amounts on a daily basis.

Despite public outcry, processed foods remain loaded with excitotoxins, all of which have been linked to brain cell death, infertility, problems with sexual development, violent behaviors, and hormonal disorders. Here’s a list of the 6 most dangerous excitotoxins you need to avoid.

This salt form of glutamate, or glutamic acid, has been known to trigger headaches for decades. Glutamate easily crosses the blood-brain barrier, stimulating cell receptors that triggers cell death. [1] While the body naturally produces glutamate when needed to trigger cell termination, flooding the body with dietary glutamate can seriously disrupt normal cellular function, especially in the brain. Avoid foods with MSG, but don’t think food is MSG-free just because you don’t see it in the ingredients list. [2] MSG also appears under the names:

Aspartate, or aspartic acid, acts very similarly to glutamate. [3] This non-essential amino acid triggers NMDA receptors in cells, another of the cellular receptors used to initiate cell death. Most humans receive aspartate through consuming aspartame, an artificial sweetener often hidden in many processed foods. It has been linked with serious neurological effects such as headaches, sleep disorders, and seizures. [4]

Another non-essential amino acid, domoic acid occurs naturally in shellfish. Excessive overconsumption has shown to lead to the development of epilepsy, especially in the elderly. [5] If you’re a seafood eater, pick wild-caught varieties of fish like salmon, trout, and tuna. This way you are receiving your omega-3 fatty acids without the excitotoxins and pollutants common in shellfish and farm-raised seafood.

Also known as ODAP, this protein is another excitotoxin that behaves in similar fashion as glutamate. It naturally occurs in the grass pea and similar plant species. Overexposure to grass pea and L-BOAA leads to neurolathyrism, a disorder that affects motor skills and movement and can lead to paralysis. [6]

Industrially created by hydrolysis of human hair and poultry feathers, this excitotoxin is important for artificial flavor creation. It reacts with sugars in a process known as the Maillard reaction, resulting in meaty and savory flavors. High cysteine levels are associated with Parkinson’s and Alzheimer’s disease. [7]

This protein compound occurs in cheese at naturally high levels. 20% of casein is glutamic acid which makes for a tasty treat; however, it also increases glutamate overload. Casein is often used by food producers to improve flavor, although it is also frequently used to increase protein levels in fitness products.

Excitotoxins such as MSG, aspartame, and cysteine have been linked to adverse effects, some of which may be irreversible. Some people have reported allergic reactions like hives, shortness of breath, and rashes. Others have reported the well-known MSG headache, as well as rapid heartbeat and stomach cramping. The most serious reactions involve depression and paranoia. Have you had a reaction to MSG or another of these excitotoxins? Share your experience so we can all better understand the dangers of these compounds.