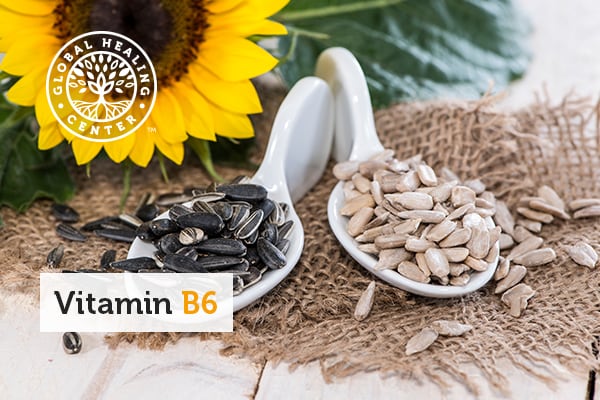 The body uses vitamin B6 for brain and nervous system function, metabolic processes, blood sugar level regulation, blood cell formation, and to support your immune system. This important vitamin is found in many foods, including meat, seafood, and some vegetables. Taking B6 supplementally is generally quite safe since excess is excreted in urine; however, extremely high intake has been associated with some side effects.

What Is Vitamin B6?

Vitamin B6 is a micronutrient with six separate compounds: pyridoxine, pyridoxal, pyridoxamine, and each of their’ 5′-phosphate esters (for example, pyridoxal-5′-phosphate or PLP, and pyridoxamine-5′-phosphate or PMP). As a water-soluble vitamin, if you take more than you need, your body eliminates it in your urine. Since your body does not store this vitamin, it’s important to consume enough on a daily basis. It’s also important to note that all the vitamin B complex compounds work together, so make sure that all are included in your diet.

Top 6 Benefits of Vitamin B6

Vitamin B6 is necessary for the metabolic processes that help with brain health, immune system function, the formation of blood cells, protein synthesis, and more. Vitamin B6 also helps regulate blood sugar levels. Below are the top six health benefits linked to vitamin B6.

Vitamin B6 helps to convert food into energy. As a coenzyme — a non-protein used alongside enzymes — pyridoxal-5′-phosphate (PLP) helps catalyze more than 100 enzyme reactions that influence your body’s metabolism. These are mostly building and breaking down proteins and amino acids.[1] B6 helps control your metabolism through the production of hormones, including melatonin that affects sleep, serotonin that boosts your mood, and norepinephrine, which releases energy.[2]

Vitamin B6 helps you have clearer, healthier skin. Making sure you get enough of this vitamin can normalize redness and swelling of the skin.[3] Those effects extend to your hair, too. By oxygenating hair follicles, B6 contributes to thick, healthy-looking locks.[4] In one study, injecting B6 intramuscularly in people with alopecia reduced hair loss.[5]

Vitamin B6 plays a role in building neurotransmitters, which are the neurochemicals that allow nerve cells to communicate with one another in the brain and across the nervous system. Vitamin B6 helps with memory, learning, and focus. Studies show that B6 can normalize mood, and mitigate issues such as depression, anxiety, and attention disorders.[6]

Glucose, also known as blood sugar, is the body’s preferred source of energy. However, consistently high glucose levels can lead to insulin resistance and conditions like type 2 diabetes. At least one study found vitamin B6 helped regulate blood glucose levels as well as insulin release in mice; the researchers suggested it may help prevent the development of metabolic syndrome (pre-diabetes) in humans, as well.[7]

Vitamin B6 also helps the immune system work be its best. B6 is involved with the production of lymphocytes, also called white blood cells, which help the body fight infection and injury.[8] Studies have found that B6 deficiency is linked to reduced white blood cell count and diminished immune system response. Some evidence suggests it may, but studies need to determine whether increasing B6 intake can improve immune system function.[9, 10]

Vitamin B6 also promotes a healthy circulatory system. Red blood cells bring oxygen to the brain and other organs. Vitamin B6 not only helps make hemoglobin, the protein that carries oxygen in red blood cells, it also optimizes the blood’s ability to transport that oxygen to tissue. A lack of B6 can lead to an anemic condition that resembles the one caused by iron deficiency.[11]

Causes of B6 Deficiency

Some people get enough vitamin B6 from their diet because it is found in meat, seafood, and eggs. Similarly, because it’s found in those foods, vegetarians and vegans may end up deficient. Where your diet falls short, you can rely on supplements to fill the gaps. There is also a higher risk of vitamin B6 deficiency for individuals who have been diagnosed with an autoimmune disorder like Crohn’s disease or rheumatoid arthritis. The same is true for those with kidney disease, who are taking medication for epilepsy or suffer from alcohol dependence. If you believe you’re at risk, talk to your healthcare provider.

Symptoms of B6 Deficiency

Many individuals who have been diagnosed with a B6 deficiency may not show symptoms for years. But some common symptoms and side effects of low B6 levels include the following.

Vitamin B6 plays an important role in neurotransmitter function, including the construction of serotonin, a neurotransmitter implicated in mood regulation. Inadequate B6 can result in depressive symptoms — as well as feelings of anxiety.[12] Many individuals with insufficient vitamin B6 experience feelings of depression and anxiety.

Vitamin B6 is crucial for energy production in the body. When you are deficient, you may experience muscle fatigue and low energy. As you digest your food, all the B vitamins work together to help transform the nutrients in your diet into adenosine triphosphate, or ATP, the energy molecule that gives your cells the fuel they need. When B6 levels are low, glucose is not converted as efficiently, leading to feelings of low energy.

B6 may offer a degree of protection against cardiovascular disease and stroke, according to scientists.[13]This vitamin helps reduce intracellular calcium ion overload, which has been linked to cardiovascular issues in some studies.[14] When there is insufficient B6, there is increased risk of high cholesterol, atherosclerosis, and heart attack. And the lack of oxygen to the brain can also lead to stroke or symptoms of dementia.[13]

Studies suggest that adequate B6 intake during pregnancy is associated with healthier outcomes in pregnancy, including higher birthweight and lower rates of preterm birth and pre-eclampsia (high blood pressure) and malformations. A recent review concluded that more evidence is needed on this, however.[15] Some studies have found taking 30-75 mg B6 during pregnancy can reduce nausea and vomiting.[1]

How to Test for Vitamin B6 Deficiency

If you are concerned about whether you are getting enough vitamin B6 or might be deficient, ask your doctor for a test. Healthcare providers typically measure concentrations of this vitamin using a blood plasma test that tests for PLP (pyridoxal-5′-phosphate) — though vitamin B6 status can also be evaluated through a urine test. A PLP concentration of more than 20 nmol/L is considered sufficient. Anything less is a deficiency and should be addressed through adjustments to your diet or supplementation.

Top Foods High in Vitamin B6

It’s fairly easy to get vitamin B6 through a healthy, balanced diet. While a plant-based diet offers great health benefits over eating meat, turkey breast and beef do have high levels of B6. But vegetarians and vegans need not worry! This nutrient is also present in certain vegetables and non-citrus fruits, as well as a wide variety of fortified foods. Here are some foods with higher levels of vitamin B6:

Adults need about 1.2 mg to 2.0 mg of vitamin B6 daily, which is achievable through a balanced diet. The recommended dietary allowances (RDA) at different ages, published by the National Institute of Health’s Office of Dietary Supplements, are listed below.[1]

* Adequate Intake (Assumed to be adequate for healthy individuals in this age range).

Vitamin B6 Side Effects & Safety

Vitamin B6 is a water-soluble vitamin, so if you have too much, the excess will be excreted in urine. Side effects from taking this vitamin in supplement form are uncommon, though it can interact with some medications, including drugs that treat tuberculosis and epilepsy.

That said, in rare circumstances, taking too much B6 has been linked to side effects such a loss of control of voluntary movements, gastrointestinal difficulties, and skin that is extra sensitive to light. Since vitamin B6 supports so many processes across the body, flooding the system can interfere with healthy function — it’s truly a case of a body getting too much of a good thing. As such, it’s important to not to over-supplement. Talk to your healthcare provider about how much vitamin B6 is right for you.

Most adults should get 1.3 mg per day, with lesser amounts recommended for younger individuals, and 1.5 mg per day for individuals over 50 years old. You can find vitamin B6 in many multivitamins, B-complex supplements, and as a standalone pill. Most supplements contain all six of the vitamin B components, but some sell PLP only. The B vitamins work with each other, so, for best results, make sure to consume food or supplements that provide all the vitamin B complex compounds.