Our muscles may actually possess a molecular memory in the form of epigenetic marks on our DNA. According to a study published in Scientific Reports, these chemical tags tell a tale of when skeletal muscles grew after exercise and could possibly help them grow bigger later on.

Although you might think that month-long resistance training class that you’ve been meaning to sign up for again was all for naught, your muscles might actually remember it. Even if taking an exercise hiatus has caused your muscles to go back to the way they were when you first started, your epigenome remembers… and it could help boost muscle growth even more once you start hitting the gym again. The researchers termed this phenomenon skeletal muscle “epi-memory.”

The study conducted by researchers at Keele University – which looked at over 850,000 sites on human DNA – contributes to the epigenetics of exercise. It suggests that genes can “remember” skeletal muscle growth or muscle hypertrophy. In this case, the epigenetic memory is stored above the DNA in the form of DNA methylation, a popular epigenetic mechanism that can influence gene expression. Similarly, your age might influence the epigenetic benefits of exercise.

Methyl groups suppress gene expression or turn genes off when added on top of DNA via methylation.  When methyl groups are removed, gene expression is increased. It’s important to note that these epigenetic changes can influence gene expression without ever altering the underlying genetic sequence – the A, C, G, T bases we are familiar with. 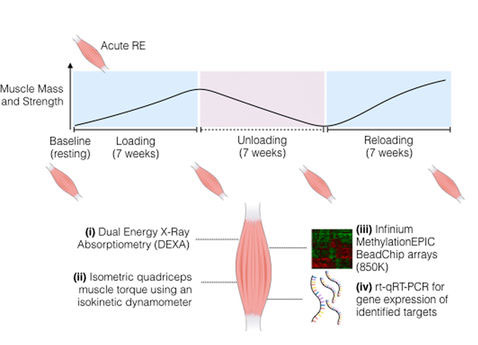 Schematic representation of the experiment and types of analysis performed across the time-course. More details in Scientific Reports.

The team performed genome-wide DNA methylation and gene expression analyses and found that epigenetic tags had been added or removed from certain genes after the muscles grew, returned to normal, and then grew again. They identified the largest frequency of hypomethylation (a reduction in methylation) across the genome after reloading compared to earlier loading. Accordingly, lean muscle mass increases were greater after reloading compared to initial loading.

Genes including AXIN1, GRIK 2, CAMK4 and TRAF1 displayed increased DNA hypomethylation together with enhanced gene expression across loading, unloading and reloading. Notably, hypomethylation was maintained even while the muscles returned to their baseline size following initial resistance exercise. This indicates a possible epigenetic memory of earlier muscle growth.

The results could have far-reaching influence on athletes who have been banned for using drugs to build muscles and enhance performance. It is possible these drugs could actually create long-term changes to the muscles, continuing to affect performance long after the athlete has served his or her short-term ban.

The senior author of the study, Dr. Adam Sharples, who is also Senior Lecturer in Cell and Molecular Muscle Physiology at Keele University explained their results, along with Robert Seaborne, his PhD student:

“In this study, we’ve demonstrated the genes in muscle become more untagged with this epigenetic information when it grows following exercise in earlier life, importantly these genes remain untagged even when we lose muscle again, but this untagging helps ‘switch’ the gene on to a greater extent and is associated with greater muscle growth in response to exercise in later life — demonstrating an epigenetic memory of earlier life muscle growth!”

Since the study was conducted with previously untrained male participants, the results can apply to the casual gym-goer, but the data have key implications in how professional athletes train and recover from injuries. Plus, it could drastically shift the rules and consequences in place for when athletes engage in cheating.

Seaborne explained, “If an elite athlete takes performance-enhancing drugs to put on muscle bulk, their muscle may retain a memory of this prior muscle growth. If the athlete is caught and given a ban — it may be the case that short bans are not adequate, as they may continue to be at an advantage over their competitors because they have taken drugs earlier in life, despite not taking drugs anymore. More research using drugs to build muscle, rather than exercise used in the present study, is required to confirm this.”

Interestingly, athletes may be able to improve their recovery from an injury and accompanying muscle loss if we can pinpoint the genes responsible for muscle memory, according to Dr. Sharples.

“Further research will be important to understand how different exercise programmes can help activate these muscle memory genes.”