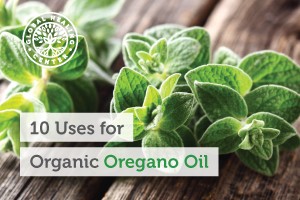 Hands down, oregano oil is one of the best natural supplements you can get. It’s produced from the perennial herb oregano and loaded with free-radical-crushing antioxidants. A growing body of research has shown that oregano oil offers many positive health benefits and is one of the most potent natural remedies in existence. In particular, there has been a significant evaluation of its effects against harmful organisms; investigations even been made by major pharmaceutical companies. Let’s take a look at why there’s so much interest in oregano oil and its 10 best uses.

What are the Top 10 Uses for Oregano Oil?

There’s a lot of evidence to show that oregano oil is a powerful tool against the harmful organisms that lead to infections. One study straight from the United States Department of Agriculture reported that oregano oil has such a strong action against germs that it could easily fight Salmonella and E. coli.

These findings were echoed by researchers the Department of Physiology & Biophysics at Georgetown University Medical Center:

“New, safe agents are needed to … overcome harmful organism infections. Based on our previous experience and that of others, we postulated that herbal essential oils, such as those of origanum (oregano oil)…offer such possibilities.”

If you’ve consumed undercooked meat or impure water, or countless other risky actions, harmful organisms are likely to be residing inside of your body. Thankfully, oregano oil has been shown to be extremely useful for helping to get rid of these unwanted invaders. One study examined the relationship between oregano oil and harmful organisms and found that taking 600 mg of oregano oil daily prompted a complete disappearance of harmful organisms in the body.

It’s not exactly a multivitamin but there’s no denying that oregano oil is loaded with vital nutrients like magnesium and zinc and vitamins C and E. It’s sufficiently high in iron, calcium, potassium copper, manganese, and niacin. As a secondary approach, oregano oil might help bridge the gap that so many people have between their nutritional intake and requirements.

I’ve said it a million times, health begins in the gut! Good digestion is absolutely required to experience good health. While I recommend using an oxygen-based colon cleanser periodically to clean out your digestive tract, stopping the build up in the first place also needs to be part of the plan, and oregano oil can help. Oregano oil is known to stimulate the flow of bile into the digestive organs, enhancing the digestive process.

Irregular, uncomfortable periods and negative menopause effects are a big problem for many women; one of the best natural remedies is oregano oil. It may actually help support regular menstruation and protect against negative menopause experiences. For women, this is a substantial bonus to the already lengthy list of uses and effects of oregano oil.

Perhaps the hottest health trend of the past few years is the science of combatting aging. It’s important to understand that aging is largely the effect of oxidation and free radicals, which is why antioxidants are so effective. Oregano oil offers a huge amount of antioxidants that can aid in the defense against these aging-accelerators.

If you suffer from allergies and environmental sensitivities, the soothing properties of oregano oil are likely to be highly appealing. Oregano oil can produce a sedating effect on the hypersensitivity of allergies, which ultimately encourages relief. For those wishing to avoid harsh medications and the accompanying side effects, oregano oil may be a natural alternative for curtailing the undesirable effects associated with environmental sensitivities.

In addition to its reputation as a natural immune booster, oregano oil also packs a punch against unwanted body fat. Its main active ingredient, carvacrol, is thought to modulate genes and reduce irritation in white adipose tissue. In one study, when fed a high-fat diet, mice not given carvacrol quickly became obese. In contrast, mice given carvacrol gained significantly less weight and even had lower levels of cholesterol and triglycerides in their blood.

Aches and stiffness can wreak havoc and really impact your quality of life. Many people use oil of oregano topically and say that it feels like it goes deep inside their skin to relieve soreness and muscle discomfort. Simply create a 50/50 mixture of organic oregano oil and organic olive oil and apply topically to the affected area for relief. If you suffer from sore muscles, sports injuries, and backaches, this is one benefit you’ll appreciate.

Oregano oil isn’t a cure for the cold but it can add a layer to your immune system. Many people claim that when they start to feel under the weather they place 3-6 drops into an empty capsule and take 2-3 times daily before meals. A 5-10 day regiment has been reported as doing wonders.

Oregano oil is an absolute must-have item for any medicine cabinet or emergency kit. The array of benefits it offers makes it one of the best all-around supplements you can get. Remember, as with any health product, quality matters tremendously.