Refined Sugar: Sweet but Toxic to Your Health

Source: Refined Sugar: Sweet but Toxic to Your Health
by Dr. Edward Group 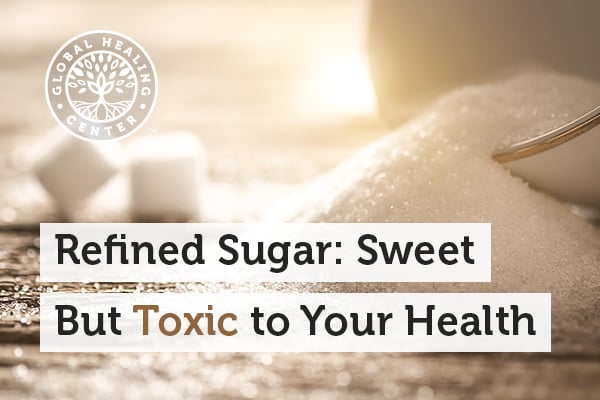 Most of us recognize that sugar does not promote good health. In fact, most people know that sugar is unhealthy, but not everyone understands the full extent of its unhealthiness. Refined sugar, such as high fructose corn syrup, is nothing but empty calories and it’s highly addictive; artificial sweeteners like aspartame are even worse. Sugar is added to many food products and it’s almost impossible to escape.

There was a time when bread consisted of flour, yeast, salt, and water. Now, sugar and a number of other, questionable ingredients can be found in most types of bread. For example, we looked at a few of the most popular brands of white bread on the market. For most, just two slices account for almost 20% of your daily sodium allowance, have more calories than beer, almost no fiber, and about 6 grams of sugar in the form of high fructose corn syrup.[1]

What Makes Refined Sugar Toxic to the Body

The dangers of sugar have been known for decades. William Dufty described the sugar problem in his book Sugar Blues, published in 1975.[1]

“Refined sugar has been depleted of its life forces, vitamins and minerals. What is left consists of pure, refined carbohydrates. The body cannot utilize this refined starch and carbohydrate unless the depleted proteins, vitamins and minerals are present. Nature supplies these elements in each plant in quantities sufficient to metabolize the carbohydrate in that particular plant. There is no excess for other added carbohydrates. Incomplete carbohydrate metabolism results in the formation of ‘toxic metabolite’ such as pyruvic acid and abnormal sugars containing five carbon atoms. Pyruvic acid accumulates in the brain and nervous system and the abnormal sugars in the red blood cells. These toxic metabolites interfere with the respiration of the cells. They cannot get sufficient oxygen to survive and function normally. In time, some of the cells die. This interferes with the function of a part of the body and is the beginning of degenerative disease.”
“Refined sugar is lethal when ingested by humans because it provides only that which nutritionists describe as ‘empty’ calories. It lacks the natural minerals which are present in sugar beet or cane.”
“In addition, sugar is worse than nothing because it drains and leaches the body of precious vitamins and minerals through the demand its digestion, detoxification, and elimination makes upon one’s entire system.”

William Dufty may have been ahead of his time; he understood that acidity leads to health problems.

“Sugar taken every day produces a continuously overacid (sic) condition, and more and more minerals are required from deep in the body in the attempt to rectify the imbalance. To protect the blood, so much calcium is taken from the bones and teeth that decay and general weakening begin. Excess sugar eventually affects every organ in the body.”

When Sugar Enters the Body

Initially, sugar is stored in the liver. When the liver can no longer handle the load, excess sugar, known as glycogen, is returned to the blood as fatty acids. Fatty acids are stored in organs such as the heart and kidneys. Here the tissues degenerate and turn to fat, affecting the whole body.

“The circulatory and lymphatic systems are invaded, and the quality of the red corpuscles starts to change. An overabundance of white cells occurs, and the creation of tissue becomes slower. Our body’s tolerance and immunizing power become limited. We cannot respond properly to extreme attacks, whether they be cold, heat, mosquitoes or microbes.”
“When refined sugar is taken daily, these bacteria wither and die, and our stock of B vitamins gets very low. Too much sugar makes one sleepy; our ability to calculate and remember is lost.”

There is also a strong correlation between sugar consumption and diabetes.[2] Sugar-filled foods and soft drinks have led to a diabetes epidemic. In the U.S., almost 30 million people have diabetes and 86 million adults over 20 have pre-diabetes. One in four diabetic Americans does not even know they have the disease.[3]

“In 1929, in Panama, for sugar plantation owners who ate large amounts of their refined stuff, diabetes was common. However, native cane-cutters, who only chewed the raw cane, saw no diabetes.”

The sugar takeover is no accident. Serious marketing efforts and even more serious dollars are at work. There are actually many similarities between big tobacco and the sugar producers. Both have invested billions of dollars developing creative ways to convince consumers that their deadly products are actually healthy.

“Beginning with World War I, the sugar pushers coated their propaganda with a preparedness pitch. Dietitians have known the high food value of sugar for a long time, said an industry tract of the 1920s. But it took World War I to bring this home. The energy-building power of sugar reaches the muscles in minutes and it was of value to soldiers as a ration given them just before an attack was launched.”
“Later, the sugar pushers advertised that sugar was chemically pure, being 99.9 percent pure. ‘No food of our everyday diet is purer,’ we were assured. What was meant by purity, besides the unarguable fact that all vitamins, minerals, salts, fibers, and proteins had been removed in the refining process? Well, the sugar pushers came up with a new slant on purity. ‘You don’t have to sort it like beans, wash it like rice. Every grain is like every other. No waste attends its use. No useless bones like in meat, no grounds like coffee. ‘Pure’ is a favorite adjective of the sugar pushers because it means one thing to the chemists and another thing to the ordinary mortals.”

Rebranding sugar as “carbohydrates” was another clever way to influence consumers. While technically true, the phrasing creates an impression that sugars are like other carbohydrates, such as cereal grains. Today, sugar is still listed under “Total Carbohydrates” on the Nutrition Facts label of food products.

“The use of the word “carbohydrate” to describe sugar is deliberately misleading. Since the improved labeling of nutritional properties was required, refined carbohydrates like sugar are lumped together with those carbohydrates which may not be refined. The several types of carbohydrates are added together for an overall carbohydrate total. Thus, the effect of the label is to hide the sugar content from the unwary buyer.”

Refined sugar manufacturers often twist the word ‘natural’ to mislead the public. Saying that something is made from “natural ingredients” creates the perception of a healthy, plant-based product. In reality, “natural” has become a marketing buzzword. Consider this example: apple and maple oatmeal. It sounds like a nutritious, vegetarian breakfast made from healthy, natural ingredients. However, a popular fast food chain has this item on the menu and it contains 31 grams of sugar — not too healthy.

Much like pouring sugar into the gas tank of a car will gum up the engine, sugar has a negative effect on digestion and nutrient absorption.

The bottom line? Refined sugar is one of the most toxic, least beneficial substances you can put into your body. If sugar, or its artificial substitutes, have a hold on your life, it’s time for a change. Sugar causes inflammation, which leads to all sorts of health problems, sugar is bad for your teeth, sugar slows digestion, sugar even has an effect on your brain. Stop drinking the nutrient-deficient soft drinks and start drinking life-supporting water. Stop consuming pre-packaged snacks loaded with refined sugar or dangerous artificial sweeteners and start consuming foods that don’t have a label. And, if you’re tired, weary, and need a boost, start cleansing your body!

29 thoughts on “Refined Sugar: Sweet but Toxic to Your Health”