Source: What is Nocturia?
by Dr. Edward Group 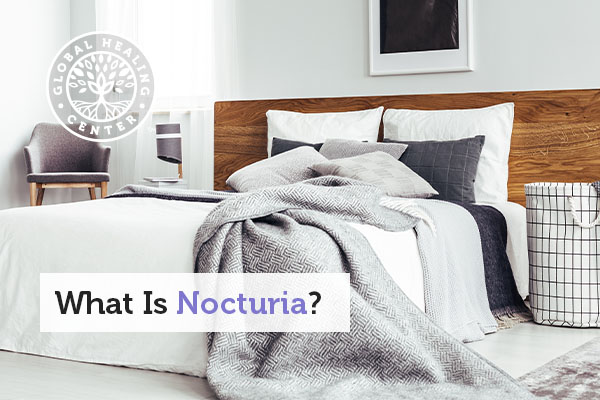 Nocturia, or nycturia, is the need to wake and urinate at least once in the middle of the night. While associated with urinary urgency, it is not a condition connected with incontinence. An overactive bladder (OAB) or more serious condition may create the need to wake and empty the bladder. Those who suffer from it have described it as confusing, distressing, and debilitating. It leads to a reduced quality of life and, in worst case situations, can be fatal.

Is Nocturia That Serious?

Most experts agree that nocturia can seriously impact one’s health. It has also been connected to increased risk of death, especially for the elderly who fear waking, feeling confused and then falling in the dark of the night, potentially breaking an arm, leg, or hip. In addition to the confusion, the disruption nocturia creates can negatively impact sleep patterns and personal relationships. How? Just ask the sleep partner whose sleep is also disturbed with every wakening.

And for the person who has nocturia, the disrupted sleep can cause physical and mental health to suffer. Prolongation of this condition impacts the ability to successfully function and enjoy daytime hours. [1] Those who suffer from nocturia have reported it as a significant problem that affects their quality of life.

Who is Affected by Nocturia?

Many medical experts consider nocturia a symptom of overactive bladder or benign prostate enlargement (BPE) in men. Typically, this condition is most often found in middle-aged and elderly men. Many health conditions for which nocturia is a symptom, plague men, especially as they age.

But it does not just affect men. Many women discover after menopause that an overactive bladder will wake them in the middle of the night with an urgent need to urinate.

Regardless, for both men and women, nocturia’s sleep disruption can become a serious problem. Worse yet, it often reflects a more subtle, and serious, underlying problem.

Is Nocturia a Symptom…or the Problem?

The impact nocturia has upon sleep quality can make it a serious problem. To eliminate nocturia, the condition that causes it must be addressed. For both men and women, overactive bladder, over-production of urine, reduced bladder capacity, weak bladder muscles, renal and urological function can lead to nocturia. Obstructive sleep apnea can has also been associated with nocturia. In men, prostate conditions (such as BPE) can cause nocturia. Nocturia may be a symptom of a more serious problem like the health conditions indicated. Regardless of the cause, it presents a problem that disrupts sleep, creates stress, and ruins daily living.

For men and women living with this potentially debilitating condition, identifying and addressing the underlying problem is a must. For many men, protecting the prostate and preventing prostate disorders may be the easiest way to avoid nocturia.

7 thoughts on “What is Nocturia?”