What are Rope Worms?

Source: What are Rope Worms?
by Dr. Edward Group 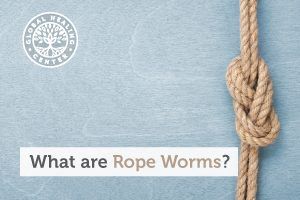 If you’re eating right now, maybe you should set your food aside for a moment. Today’s topic, rope worms, isn’t especially appetizing. While parasite biology is not for the squeamish, the importance of this subject cannot be understated. Rope worm, a newly-discovered intestinal invader, may be one of the most frightening and most overlooked parasites plaguing human health today.

Rope worm is different from other known parasites, like roundworms and tapeworms, in that they resemble human feces and intestinal lining. Dr. Gubarev and Dr. Volinsky, researchers who first introduced the parasite at the 2013 International Chronic Disease conference, estimate that every human being may be infected with some type of rope worm. [1]

What Are Rope Worms?

Rope parasites are often mistaken for decayed food matter (feces) or intestinal lining. They were discovered following a routine enema cleanse and were tested to contain human DNA. It is estimated that at least one in four people are infected with intestinal parasites. Symptoms vary and include weight gain/loss, headaches, indigestion, rashes, increased cold and flu incidence, and even cancer. [2] [3]

Many theories have been proposed to explain the presence of rope worms in the human intestinal tract.

The last theory is perhaps the most alarming, making an organic, all-natural diet a possible protective measure against parasite infections.

Mature rope worms can grow over one meter long and have an irregular cylindrical or rope-like shape. Their color is often a dark brown, similar to that of feces. When expelled from the body and exposed to air, they produce a distinct and off-putting odor. Some have speculated that the parasite in rope worm causes the human gut to make a body for it as a vehicle through the intestinal tract, one containing a mixture of parasites and human cells.

Researchers report that mature rope worms affix themselves to the colon wall with the help of suction cup-like bubbles. Food substances have been found in the remains of rope worms, suggesting these parasites may prevent nutrient absorption. Rope worms have also been shown to release toxins in the body as a waste product, further compromising the health of the human host.

People with rope worms may experience bloating, gas, frequent illness, headaches, indigestion, heightened allergies, and back pain. These symptoms are not always perceived as connected to the presence of a parasitic worm, and many people will overlook the possibility of having rope worm altogether. Researchers have noted that 15% of cancers are related to parasites and some studies have shown that intestinal parasitic infections can negatively affect mental performance. [4] [5]

According to Gubarev and Volinsky, coffee enemas are one of the most effective ways to remove rope worms. Other procedures thought to work well include probiotic enemas, milk enemas, water fasting, cleansing, juice cleanses, and large servings of vitamin C. [6] Avoiding GMOs, sugar, and wheat also appear to encourage the evacuation of rope worms. A basic, yet thorough cleansing is one of the simplest and minimally-invasive approaches to removing unwanted toxins from the intestinal tract.